Books, Kids, and the Meaning of Life 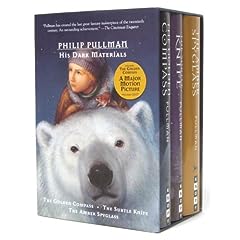 The kindergartner gazed up at me earnestly, blonde sticks of hair falling in her eyes.

I instantly thought of my copy of The Golden Compass sitting on a shelf behind her, waiting with my other things until I had finished my volunteer duty for the day. Had she seen it, prompting the question? I didn’t think so.

“No,” I said, with absolute conviction. “God cannot die. He’s not a human being like us.”

My own daughter Elizabeth looked up from her drawing. “Yes he can! Jesus died on the cross!”

I picked up the crayons scattered across the desk, buying time. “Jesus is the son of God, and he rose again three days later. God is not something that dies in the way we think of dying, that we’re not walking around and talking anymore.”

The little girl persisted. “So can you kill God?”

“Nope,” I said. “It’s the same thing. You can stop believing in God. But he doesn’t die to everyone else just because you change.”

The lights flickered. The teacher got their attention to wash their hands for lunch. Whew.

I collected my copy of the much-debated novel as I followed them down the halls. My own church had sent a note home from Sunday School warning parents not to take children to see the movie, that our world was complicated enough without making them doubt their religion.

I couldn’t have disagreed more, but I didn’t speak up or make a fuss about it. She had every right to send the letter out. And I had every right to ignore it. To me, that little girl asking me the question, whether born of rumors about the book or her own burgeoning curiosity, is the best thing that can happen. Instead of someone saying, “Believe this and ignore anything else,” I got to say, “Here’s why I believe this.”

I didn’t pick up the book over the controversy, which got increasingly convoluted last holiday season as the movie hit theaters, but because a writer friend of mine felt Lyra, the main character, was spunky and troubled in ways that paralleled the main character of my middle grade novel Jinnie Wishmaker. I haven’t read enough of the book to draw any conclusions on either its anti-religious content or the similarity in protagonist, but I’m sufficiently pulled into the story to keep going. That’s what counts to me.

The book drew more comments at the third grade lunch. The boys were all clamoring to say how far into the series they were. Most had read at least Compass, others were two or three books in. All had read the entire Harry Potter series.

These kids are eight and nine years old. I surged with pride at them and their willingness to devour books. These were smart, athletic, active boys, and still, they loved to read.

We compared thoughts about numerous books and switched to movies. I learned the little darlings were unabashed liars, all insisting they had seen horror films such as The Grudge, The Ring, and Descent. They were a little muddy on details, but I didn’t call them out on it. I was impressed by their ability to wing it. Emily did not seem embarrassed that her mother had such a camaraderie with her classmates instead of the more appropriate “distant smiling mother” that most kids favor. She didn’t really take part in the conversation, but remained happy and upbeat throughout.

I walked away realizing my life was always backwards. As a kid, I related better to grown ups, who were less likely to act impulsively and, I felt, somewhat irrationally. Now in my thirties, I find I enjoy very much the conversations with kids precisely because they are so impulsive and unexpected.

Since I’ve touched on the subject of challenged books, I’m also going to take a moment to support John Green’s young adult book Looking for Alaska. His video on the controversy is dead-on.