Writing on the Road: Hardly Auspicious

Okay. So the day began with mom’s doctor visit going poorly and long. Actually, scratch that, the day began with putting in my contacts, one of which hurt awfully and upon inspection, had somehow become square-ish, so was no longer usable. I had to toss it and get a new one.

Then a shower proved I had brought a travel bottle of hand lotion, not hair conditioner, which I fortunately figured out BEFORE I put in in my hair, but I had to yank tangles out without the benefit of lube–NO FUN.

The “check engine” light is now permanently on in my car although everyone assures me it is just an emissions thing and not to worry about it. 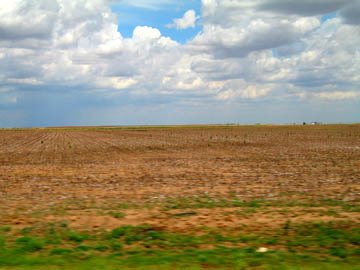 And, despite it being glowing and sunny and blue sky for the first few hours of my drive, now it is storming and lightning. So I am not at a campsite, which received some 10 inches of rain today, but at a hotel, proving everyone right (especially dad, who told me today in the waiting room at mom’s doc that I was “nuts” and mom agreed, saying they remembered what kind of girl I was since I arrived kicking and screaming onto this planet and apparently asking for a down pillow and Evian. )

At any rate, I found a hotel that was, inexplicably, almost the same price as the campsite and has free wireless internet. So I write here and look at the picture I took earlier in the day and think: boy I better work my tail off since I have a connection and a room and am NOT roughing it in any way (although, ICK, the room is, yes, a bit rough.)

I’ll post in the morning on my progress. The good news is that the weekend at my destination says 70s, and less than 10% chance of rain. Should be able to camp tomorrow night. I’ll be at a good place for that anyway. Wherever that is.

« The book is done! » Writing on the Road: Unsettledness