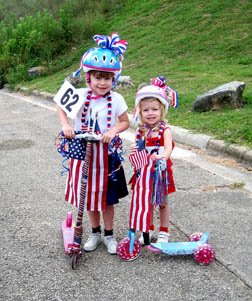 This Fourth of July, as we have since the girls were born, we gussied up some mode of kiddie transportation and traversed the route for the neighborhood holiday parade.

In some years, the competition between moms has been fierce for high-profile prizes such as Best Decorated Stroller, Most Colorful Bicycle, and Most Patriotic Wagon. Some years we have won (BDS 2003); others we’ve suffered the agony of defeat.

My best friend and nemesis, Stephanie, usually takes multiple prizes and this year was no exception. She snagged MCB and also the tricycle category, although we think a toddler with a bow-bedecked trike got robbed as Steph’s daughter’s “tricycle” was actually a bike with big training wheels. We would have demanded a recount, hanging chads and all. But it was clearly a liberal ballot. 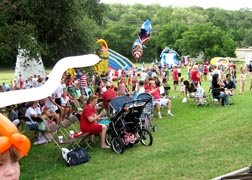 During the parade this year, the girls rode scooters, an edgy category as the slender frame of this mode of transport does not provide much room for creativity. We did the best we could with flag and ribbon. I think the coup de grace, however, was Emily shedding her unflagging tomboyishness and donning a skirt my mom made for me in the 1976 Bi-centennial. The 30 year old outfit attracts attention with its red, white, and blue panels and trim.

Emily wanted to dash ahead and exploit the long smooth street leading up to the Country Club with daring speed. Elizabeth lagged behind with her dad about a quarter mile back. I lamented the loss of the duo, as I felt their matching scooter set was an asset sure to bring in the win, but girls will be girls.

We walked the grounds of the Club, moonjumping and water dunk boothing and eating cookies. We all grew edgy as the band finished their number and the neighborhood president took the mike to announce the winners. This was mainly, however, because Elizabeth demanded a flamingo balloon and we had picked the wrong twister. “Jelly Bean does those,” the clown said, pointing to a woman across the field with a snaking line leading from her table. 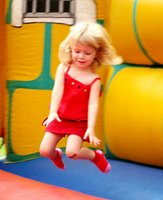 “Just make it pink, and fast,” I said. “She won’t know.” We had no time for flamingo hunting at a time like this!

And Elizabeth accepted her pink tangle without question.

We approached the stage and listened to categories. Emily was a bit tense, I noticed. She knew what was happening, and that she might win or lose. I wondered what would happen if one sister won and the other didn’t. I closed my eyes, sweat dripping between my shoulder blades. Howling, no doubt, would be involved. 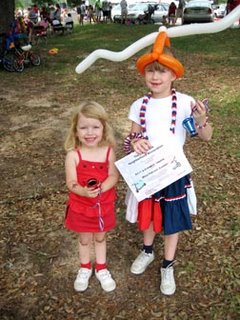 “And we have two sisters taking the scooter category!” the man said. “Emily and Elizabeth!”

What were the odds of that? They must have been chosen separately, and when the entry numbers compared to names, decided they should share the prize. The girls headed up to the bandstand without prodding and accepted their prizes.

There must have been a parent on that judging panel who understood sibling rivalry. Thank God for that.

Have a good holiday, everyone.