I never get tired of Los Lonely Boys. This ACL was my fourth time to see them live and I still love their guitar antics, their trading instruments, playing on their backs, and one handed. I got their new album a week ago to prepare for the concert and all I can say is “Oye Mamacita!”

Gnarls Barkley was a surpisingly fun show. Everyone on stage wore white lab coats at the beginning but we all expected they’d shed them before long. He was mid-afternoon and the only time I actually thought I might faint from the heat was during his show. 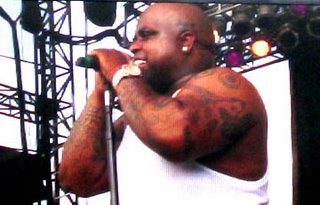 He teased the crowd, as if expecting few knew what he looked like, saying, “Gnarls Barkley couldn’t make it but we’re here to cover his songs!”

When we first arrived, as Asleep at the Wheel was playing, the park was empty. You could walk right up to the stages and be in the front row, weaving between people chillin’ out in lawn chairs. 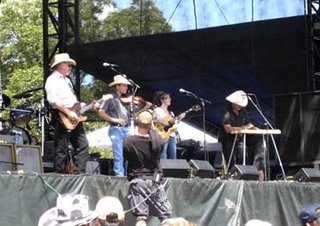 By about 5, though, they place was packed as you’d expect, and the park was a human obstacle course.

They did have more grass, and the misting stations were awesome. We dropped by several other shows–Terri Hendrix, Mishka, Guster, and Stars. Itunes gave out cards with a pass for 30 songs from various artists at the festival. I downloaded them last night. Our favorite band name (although not their music) has been I Love You But I’ve Chosen Darkness. 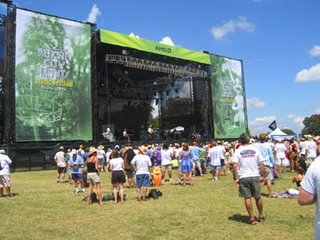