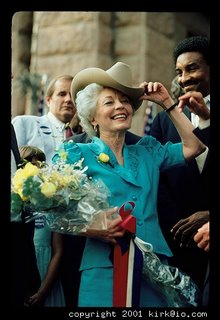 I remember the gubernatorial race between Ann Richards and Clayton Williams well. I worked at the Daily Texan, and my friend Janel got the glam job of covering her race while I had the ho-hum work of Phil Gramm’s re-election bid. This was November 1990.

I had covered a lot of Clayton Williams’ campaign, most notably the protests after his joke about rape, told to reporters on a hunting trip. For Halloween that year, we all wore Clayton masks cut from the newspaper, because nothing could get scarier than him being governor.

But still, he had money, he was a good ol’ boy, and political correctness had not really hit Texas with a hard heel. He pretty much said what he wanted, acted how he pleased.

As the night wore on, my race ended early with a landslide for Gramm. I was able to finish quickly, but with the governor’s race in a dead heat, we knew it would be a late night for everyone at the paper, so I wrote my story out in longhand in the passenger seat while Janel drove across town to Ann Richard’s campaign headquarters. We knew we ought divide our time at Clayton’s HQ in case he won, but we just couldn’t bear it if he did, so we hoped heading to her camp would somehow tilt the scale.

The euphoria when Williams finally conceded the race is hard to describe. Paper flew; people cried. Janel and I, objective journalists that we were, screamed and hugged, then pushed forward to try and get close enough to ask a question. I finally let her go on through and held back, just smiling and watching everyone celebrate.

It didn’t matter that it was 1 a.m. by the time we got back to the newsroom to file our stories. Everyone was down at the offices, jubilant and relieved. We stayed up all night, thrilled and excited that the clever witty brilliant woman had proven that “A woman’s place is in the dome.”

We’ll miss you, Ann. If only you’d have beaten out W in your re-election bid for governor. Think where the world might be instead. You’d have made a mighty fine president.