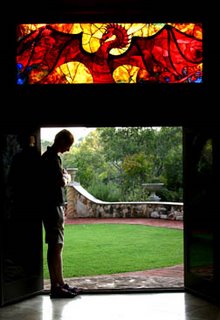 Last night my photography group met at Dunvegan Keep, one man’s backyard turned architectural and landscaping mecca. The images in this post are from there–Kurt standing in the doorway of the Knight’s retreat, all dragon windows and swords. 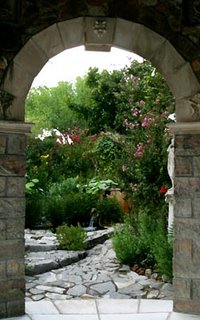 This amazing piece of land has been featured in national magazines and on Good Morning, America, which seemed like a good idea, since the owner rents it out for weddings and photo shoots. But this also caught the attention of the neighborhood association and the tax assessor, so he’s dealt with unending battles with both. Lawyers have threatened to tear down his tower and send him the bill. It’s not pretty. 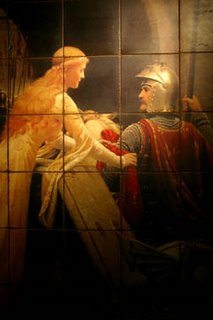 But the grounds are gorgeous. He’s done all the work himself–immense stone structures, carefully inlaid mosaics, doors and artwork brought from Africa.

It’s funny and ironic and terrible that someone can create something so beautiful, so intricate, so well planned, only to find so much controversy. Life isn’t about art, after all, it’s about resell value.

« Thank Goodness for Friends and Muses » Christmas in September