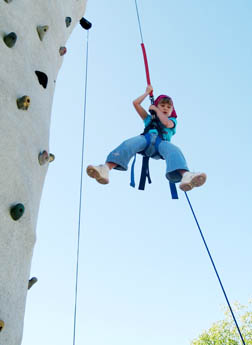 I blog so often about little Elizabeth, as she is the diva and the attention grabber of my pair, but two weekends ago, seven-year-old Emily and I went on a mother-daughter camping trip.

Much of the activities were a bit scary even for a second grader–jumping off a huge dock onto a giant inflated raft called the “blob” about the size of an 18-wheeler, swinging off a 50-foot rope into the lake, and even the archery was a bit hard to manage for the girls.

But in one of the sports that sent almost all the girls into paroxysms of fear, Emily kicked some tail–rock climbing.

The camp had set up a rock wall that was a good two stories high. Most of the girls put on the harness and gave it a try, but few got beyond the reach of their mothers. I could see the difficulty, even with the harness you had to both cling to the rocks with your hands and push up on others with your feet while at an angle that felt like you were falling. Many tears were shed; many panicked kids begged to be brought down.

Emily was the third to the last to go. I was a little anxious, as only three girls out of the 15 had managed the climb even partway and only two had reached the buzzer. Emily watched her best friends come right down after going a mere three feet up, but she seemed loose and ready.

I shouldn’t have worried. She no more had her legs in the harness when she began scaling the wall rapidly and methodically, looking up for the next handhold and never glancing at the ground until she pushed the buzzer. When it came time to slide down the rope, she shoved away from the wall and sped down the line so fast even I felt a flutter of panic.

But then she waited her turn and did it again.

« I Have Been Phantomed! » Trick or Drinkin’