The Dust Bunnies have arrived! 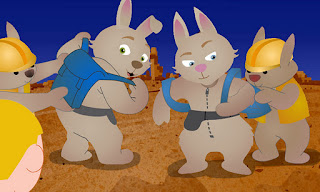 After two years of development, Dust Bunnies: Secret Agents is available on the iPad and iPhone/iTouch!

I have to think hard now to remember the night in 2010 that I sat at the dinner table with my daughters and we brainstormed a story to match the exciting app design by the producers at Polycot Labs. They wanted something where the main character could be changed to look like the child who was reading the story, and the names in both the captions and the audio would be theirs!

I knew that the side kicks would be important since the hero would change, and we decided that the Dust Bunnies living under the bed would be ideal. It was my then-seven-year-old Elizabeth who decided the story would be more exciting if the bunnies were secret agents!

The story has evolved through time, based on the art, the audio, and the flow of the story. Each panel had to be drawn with multiple overlays for children who were a boy or a girl, with one of four different hair colors or skin shades. I had to record several lines of the story more than 400 times to read off the most popular boy and girls names.

Watch the story trailer! And if you like it, pick up a copy in iTunes store. And leave a comment there and they’ll get back to you!

« The terrible parent or the good one? On publishing your children’s books » Baby Casey, 14 years later